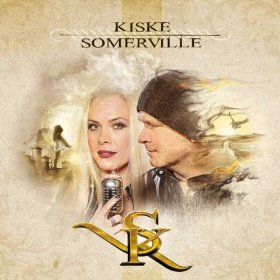 First of all, huge apologies to so many folks out there who have been waiting for, expecting some of these 'Frontiers Records' reviews for some time now ... I have just been absolutely overwhelmed with new material to review, for the past few months and I'm trying to catch up where I can, as there are a number of these, that deserve serious attention and this for starters is one of them!
So, let's get this thing started shall we, hmmm?!
For me, both these singers past history is really with bands I really hadn’t covered before, for any site I've previously written for or 'Chambers of Rock,' but you know what? I love this album!
It’s very good European sounding melodic hard rock meets symphonic metal kind of styling.
Amanda Somerville, possibly best know for her work with Avantasia, but if you look her up through the web, it seems she’s done plenty of varied work before. Michael Kiske I should know more about, from his best known band Helloween, but I really don’t, but together under the project guidance of one Mat Sinner (Sinner, Primal Fear), they really have something here!
‘Nothing Left To Say’ comes out of the gates – So to speak! – in a similar fashion to say, Gary Moore / Phil Lynott’s 'Out in the Fields' and it’s actually immense.
With ‘Silence’ next, which was apparently the first single, it makes me think of a more commercial / melodic Evanescence and it's very good indeed.
‘If I Had a Wish’ follows a similar path as the opener and the guitar harmonies remind me a little more of a heavier Thin Lizzy, but if you’re not a Lizzy fan, perhaps the bigger melodic hooks here are what should grab you! Very good indeed.
Amanda Somerville’s voice starts hauntingly on ‘Arise’ in a beautiful sense, yet the song started with a very metallic start and comes back to that metallic sound again and then there’s those harmony guitar solos, but the song is still indeed strong.
It’s that symphonic metal sound again, that starts ‘End of the Road’ and you know Savatage or should that be T.S.O. come to mind to a degree here and there’s a seriously widdly, widdly guitar solo here and I wonder if it’s Mat Sinner’s bandmate Magnus Karlsson from Primal Fear or the other guitarist here Sander Gommans, either way, they both combine very well in the overall sound, alongside great players in drummers Martin Schmidt and Ramy Ali, as well as keyboard man Jimmy Kresic.
The harmony guitar work plays a big part in ‘Rain’ next to open the track and then we have another big chorus driven track. Great stuff indeed!
‘One Night Burning’ is a seriously big power ballad, interesting sounding guitar solo though, a little different with vibrato effect.
With ‘Devil In Her Heart’ it chugs along building with an almost Bon Jovi like way, but it’s in that symphonic metal manner.
It’s power ballad time again with ‘Second Chance’ which as with everything here, continues to impress and the way that Somerville and Kiske’s voices work so well together, throughout the album, I sincerely hope there’s a second one to follow!
Closing track or ‘bonus track’ as it’s called here on my copy of the album is ‘Set Afire’ that starts in a seriously metallic way, before rhythmic drumming guide Somerville’s haunting vocal line, then joined by Kiske and sounding all the more haunting.
Some mystical sounds, alongside the metal edginess here for sure.
So a very good album indeed, really great vocally and the music playing, although it’s quite metallic in places, it’s got so many hooklines, it’s sure to grab anyone who enjoys edgy yet melodic rock.
There was even a bonus 3 track DVD second disc with some copies with video’s of ‘Silence’ and ‘If I Had A Wish,’ along with the the making of the album.
Here’s to ‘Kiske / Somerville 2!’
Rating: 4 out of 5