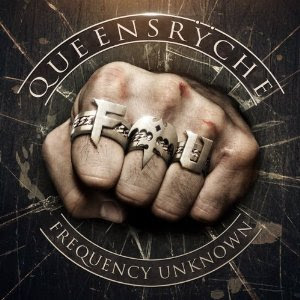 So, here’s the first of two new releases by the band’s - Yes, I did say band's ...! - Queensryche and this is the lineup that features original singer Geoff Tate and none of the other members of the most recent lineup that still included Geoff Tate and recorded the 2011 album ‘Dedicated to Chaos,’ before last year’s band split.

So what of this new album 'Frequency Unknown' featuring Geoff Tate, is it just another Geoff Tate solo affair following on from his solo release last year, ‘Kings and Thieves’ or has he tried to capture the Queensryche vibe at all?

Well, a couple of points are very clear and first off is that if he couldn’t have all of the last Queensryche lineup onboard, Geoff Tate would put together a very respectable lineup, to record an album under the title Queensryche.

He went back to grab a player from his pre-Queensryche days from the band Myth, in Kelly Gray who in fact was the guy who had replaced original guitarist, Chris DeGarmo who quit in 1997. – Kelly was let go from the band in 2002.

The also much in demand drummer Simon Wright (UFO, Dio, AC/DC) also plays on two of the album tracks as well as has been touring already with this version of the band, until recently where Brian Tichy (S.U.N., Whitesnake, Foreigner, Billy Idol, Gilby Clarke) has stepped in while Simon rejoins his band mates in Dio Disciples on tour in South America.

Other players involved here who I know little about really are Chris Cannella (Guitars), Evan Bautista (Drums) and the album’s producer Jason Slater who also plays bass and keyboards through the album and who actually produced three of the last four Queensryche releases before this one. So I guess I did know that about the guy!

That’s a lot of info on the people involved in this project and probably for many rock fans, perhaps you couldn’t care less about who played on this, as it’s not all of the guys from Queensryche’s past!
So, shall we get on with the music?

It is quite heavy in places, certainly comes across as angry from Tate too, just listen to his lyrics throughout and certainly I would guess that opening song ‘Cold’ is most likely directed at his former band mates who moved on with Todd La Torre.
Would I call it as progressive as many fans would like? I think it is in places.
I think this opening song is edgy, plenty of power chords yet it has a catchy melodic feel to it, plenty of keys splattered throughout.

‘Dare’ next is also full of attitude and I will say it almost nods at rock/rap here and there, which I know Tate has come close to before. Some weird chord patterns right after the mid-section and into the bridge.
Doesn’t work for me really, it’s OK.
Some of the phrasing on next track ‘Give It To You’ again tends to nod to borderline rock/rap and when I hear the line, ‘How’d you like me so far,’ I can’t help but be reminded of the song by The Heavy, ‘How’d You Like Me Now?’ Not a good feeling …
That said, Robert Sarzo plays some absolutely killer guitar here, love the solo, really is a winner!
‘Slave’ is very almost punky / grunge like and I really can’t put it any other way, it just is. Not too keen on this at all.
You know, there’s often been times when I listen to Geoff Tate’s voice and many times think he’s very similar in sound to Iron Maiden’s Bruce Dickinson, on ‘In The Hands of God,’ is just one such time, but that’s not to say the track sounds like Iron Maiden by any means.
It’s a kind of prog like track with its highs and lows for me throughout, it’s OK but I do have add, I really enjoy Ty Tabor’s guitar work on here, it’s actually very much in a similar vein to Neal Schon (Journey), very nicely done indeed.

‘Running Backwards’ starts with a creepy sound, not quite sure what it is, maybe messing with the guitar bridge before getting into heavy edged groove and then easing off a bit through the verses with Geoff Tate giving it a borderline rock/rap meets prog like vocal here and then it gets into a manic solo from guest player KK Downing.
It’s OK, but isn’t really growing on me even after a number of plays.
Next is ‘Life Without You’ which seems to have a little more commercial feel to it and there’s an interesting dark’ish, edgy solo from Night Ranger guitarist Brad Gillis, before getting back to the song and then Brad wraps up the song with a solo that sounds like something Zakk Wylde might do. Crazy!


‘Everything’ up next captures a kind of light and dark heaviness with some very melodic touches to it as well and once more, some very nice guitar work from Ty Tabor.

You know I’ve read all the stories about how badly mixed this album was and yes it may have been before, but I understand the version I have was redone and for all intents and purposes I think it sounds a very good mix, yes really, not bad at all.


I also think there’s nothing wrong with Geoff Tate voice from his performance throughout, so to the doubters out there, I think you have it wrong …
I personally think the direction Geoff's looking for though is perhaps uncertain, but that's just my take, I'm sure live he's still belting out the classics just fine.

I do agree that his attitude issues which were very clear on the TV broadcast of last year’s Rocklahoma show, was bad and subsequent activities on the South American dates that followed that, which ultimately led to the split, were just simply wrong.
Really friction had been brewing for some time, so really the split was on the cards ..., but let's get back to the album here!
‘Fallen’ is up next and this features one of my favourite guitarists Dave Meniketti on the guitar solo.
The generally vibe on here captures a pretty atmospheric sound, with a lot of layers to it, good mix of sound, good emotional vocal performance and indeed the solo from Meniketti slots in well with a great band performance.
Last of the new material here is ‘The Weight of the World.’It’s a big epic like number that builds from it’s quiet, gentle intro into some big crunching power chords into rocking groove and then eases back off again …, think also of how Whitesnake’s ‘Still of the Night’ goes back and forth – Ed’s note: For the record, this sounds nothing like ‘Still of the Night!’ – and Chris Poland’s guitar solo is fantastic!
So, the new material done, what’s my take on that?
Is it back to classic Queensryche? I don’t think so.
Are there elements of it, yes, here and there, but overall I like the majority of the album, I think it’s a good rock album, but still there are two or three songs that even after a number of plays, didn’t do it for me.
On the remakes of ‘I Don’t Believe In Love,’ ‘Empire,’ ‘Jet City Woman’ and ‘Silent Lucidity,’ Geoff Tate has called on the services of Argentinian multi-instrumentalist, Martin Irigoyen who I knew absolutely nothing of before I saw his name here.

Basically Geoff sings and Martin does all the rest, well at least drums, guitars, bass …, but it doesn’t mention in the album’s sleeve notes, who is playing any keys …? Hmmm …

Overall, good to hear these again, but I don’t hear any dramatic edge one way or the other with the four re-recordings.
Certainly a pretty respectable release with some very good performances.
Overall rating: 3.5 out of 5
Official website:
http://www.queensryche.com/
Links to purchase the album:
http://www.amazon.com/Frequency-Unknown-Queensryche/dp/B00BKBCGDW
https://itunes.apple.com/us/album/frequency-unknown/id619342946
﻿
Posted by cozyal at 12:10 AM No comments: