Two bands with some great and lengthy history behind both of them, top selling albums for both acts too, although it’s been a while in the case of either act since they recorded any new album ... My understanding on The Sweet front is original Sweet member, bassist / vocalist Steve Priest has no plans to.

April Wine’s last studio album ‘Roughly Speaking’ from 2006 though would certainly be the latest studio album release from either band, even though The Sweet did issue a cover of the old Beatles song, ‘I Saw Her Standing There,’ back in 2010 through iTunes. It was also added as a bonus track on the reissued ‘Are You Ready?! - Sweet Live’ a couple of years ago.

Live recordings and compilations continue to be released though and the live release by The Sweet was pretty good and included Stuart Smith on guitar at the time, before he left in 2012 to work on the latest Heaven + Earth album, released earlier this year.
Two other Heaven + Earth band members are still a part of Steve Priest’s Sweet, in drummer Richie Onori and singer Joe Retta, although Joe was absent on this particular evening’s show, due to a prior contractual commitment.
In his place tonight is Chas West (Ex-Bonham, Foreigner) on vocals, while completing the rest of The Sweet lineup are Stevie Stewart on keyboards and Ricky Z (Zahariades) on guitar.
April Wine put out a nice double live album a few years back now in 2010, but recorded in 2003, titled ‘Greatest Hits Live 2003.’ 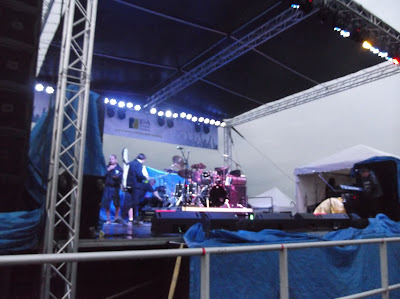 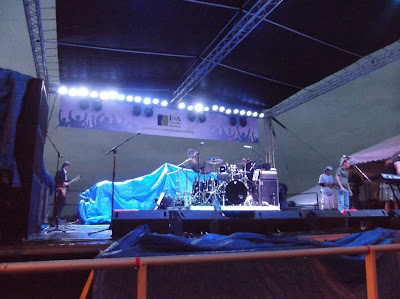 As the stage continued to be worked on making it safe for The Sweet / April Wine, it was still looking touch and go ... Off with those tarps!
Photo's: Alun Williams

Anyway, to the gig and what a crappy day it had been with constant downpours and electrical storms, that the bands here although they tried, really did not get the chance to sound check.

The stage itself is a rusty old barge, tied up to the boardwalk and in terms of stage cover to protect ‘anyone’ – crew / techs included, there was next to nothing! Cover on the top yes, covers on the sides – to prevent rain coming in… - none.

Rain had been teaming down all afternoon, with thunder and lightning going on the whole time, this had certainly kept folks away from being there to check out the local bands who were trying to play.
The last local band The Gobies, only got to play 4 songs, which weren't bad covers at all before they were told to get off the stage for safety reasons.
The Sweet

Eventually the rain eased off for The Sweet to take the stage, they were due to start at 9pm, but the weather had pushed their start time back to 9.35pm so they had to cut out a few of their best known numbers. 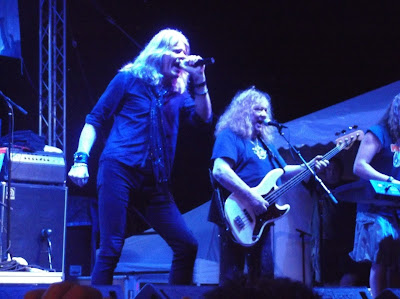 Chas West alongside Steve Priest as Sweet kick off their short set! - Photo: Alun Williams
‘Action’ seems to be The Sweet’s favourite opening number and it starts the show for them tonight, it still sounded good.
Chas West I have not seen live in years and he appears as though he could be Sebastian Bach’s brother, same build, similar stage dress sense, perhaps just a tad shorter hair.

It’s ‘Hellraiser’ next and it didn't sound bad at all, all things considered - no soundcheck ... -  although Ricky Z’s Gibson SG sounds a little thin at times, comes across like it’s lacking punch and his style and chosen sound, is perhaps a little funky. 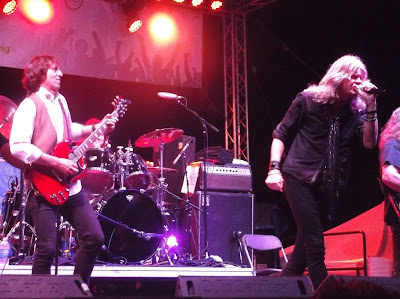 ‘Love Is Like Oxygen’ next comes across well, although it gives me a chuckle when the song comes to the bridge and the crowd thinks it’s over when the power chord wrapped up where the song finished on the original edited 45 release back in ’78.
As they wrap up the full length album version, Ricky ripped out a monster solo and now his guitar is sounding very strat like, kind of Ritchie Blackmore style, with a sound his predecessor Stuart Smith used to favour also. 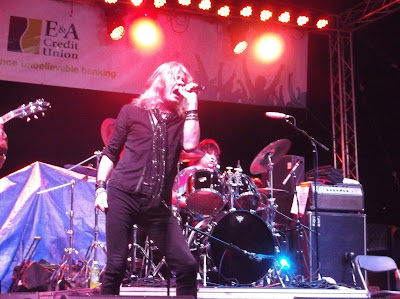 Richie Onori is 'the man at the back,' keeping it tight on drums! - Photo: Alun Williams
Steve Priest introduced the next track as, ‘a song about a guy that wouldn’t go home and who has a name that does not refer to me!’
Cue ‘Little Willy,’ one of the band’s early 70’s bubblegum pop rock tracks, these days given much more of a ‘rock makeover’ angle.
The wind starts to get up again at this point, like the storm is about to roll in again, but the rain holds off and the band were about to launch into ‘Teenage Rampage’ when suddenly band members communicate that, ‘no, we’re not doing that one.’
‘Fox on the Run’ though was next and it certainly seemed to make up for it with the crowd. It’s actually my favourite Sweet song, so it worked for me! 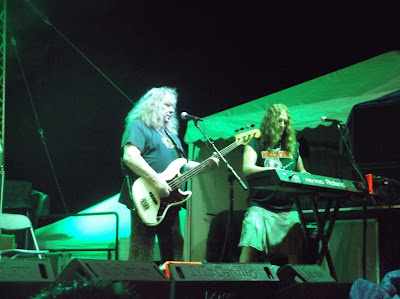 Steve Priest and Stevie Stewart, yes, with the kilt on! - Photo: Alun Williams
‘AC/DC’ was next and the band went for some audience participation at this part with Stevie Stewart, sporting a Scottish kilt getting centre stage with Chas, Steve and Ricky, to get the crowd clapping along and shouting the chorus.

‘Ballroom Blitz’ was the final song and possibly the winner of the set and it gets a few more of the seated VIP folks on their feet and the band wraps up their set with it.

Clearly warmly received, but since time is limited, there’s no encore opportunity for Sweet, so next up was April Wine.
April Wine


So to a delayed headline set from April Wine and as the band walk across the front of the VIP area to ‘board the barge’ Myles Goodwyn looked precariously at the water and walkway onto the barge and some of the movement of the barge, from the large sea freighters that pass through Lake St. Clair and cause some wakes / waves that physically rock the barge!
It had been about eight years since I last saw April Wine live, it’s been way too long, so I was looking forward to this, though I wish conditions had seriously been better.
Their set like Sweet’s before was shortened and yes, they had to start late too.
By the time they hit the stage, I was soaked and temperatures were dropping and had dropped quite a bit already!
Not good … 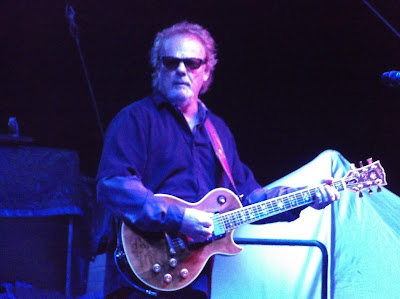 Myles Goodwyn onstage with April Wine, St. Clair, Michigan. 'You looking at me?!'
Photo: Alun Williams
They opened with ‘Anything You Want, You Got It,’ from their ‘Power Play’ album, which I personally loved so a very good start for me.
The band’s vocals still sound as good as you would expect from the band, who've always focused on harmonies.
‘Say Hello’ next from the ‘Harder Faster’ album was also well received, although when I had looked at the original set list they had, this was planned to be the fourth song of the evening for the band.
They continued with songs from possibly their most successful 80’s period, ‘Enough is Enough’ next seems to come over just fine too, with a really nice solo from Brian Greenway.
The band are really putting on a brave face, as the evening gets cooler still, they’re up there with the wind blowing across the stage and it’s a cool wind for sure!
The old King Crimson track, ‘21st Century Schizoid Man’ that they made their own on ‘Harder, Faster’ came next and to be honest, looking around at the crowd there’s a lot of cold wet fans bracing themselves here …

The music sounded good to me, but boy …, it’s a lot cooler than the day was before the rain came in! 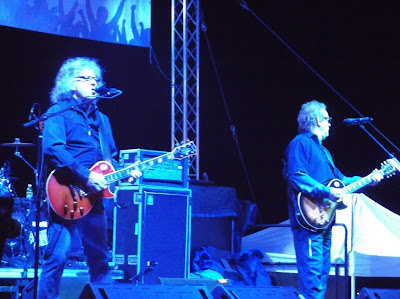 ‘Before The Dawn’ next and a Brian Greenway vocal, as Myles Goodwyn’s voice, still sounds good these days and his solo totally rocks out!


From the ‘First Glance’ album we get ‘Right Down To It’ next, with what seems to be a lengthy intro, maybe I was just too darn cold! 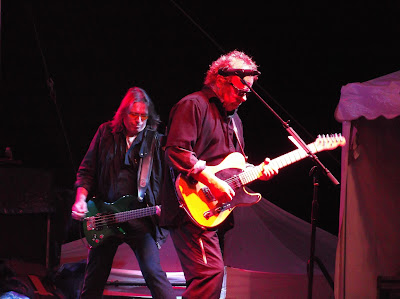 More of the folks in the seated VIP area, who for the most part stayed seated and huddled up to whoever they were with, seemed to be encouraged to get up as the opening chords to ‘I Like To Rock’ were played.
Certainly got people moving around a bit, before halfway through, the band walk off leaving just the drummer and Myles says, ‘Here’s Roy!’Surprised with the shortened set time, that they even include a drum solo, but the band came back out and wrapped that song up well.

To my point next Myles says, ‘We’re running out of time so next we’re going to do a slow song, really fast!’
Cue ‘Just Between You and Me …’
What a great track!

It had become so cold, my hands were going blue believe it or not and I was freezing, so I made my move at this point.
Long cold walk to the car and a forty five minute drive home …
Sorry folks, I wasn't sticking around any more on this cold and wet night.

I heard ‘Sign Of The Gypsy Queen’ as I walked away …, but that was it for me!

Both bands and their limited crew in each case, did very well in the circumstances, no real sound check and terrible weather.
Pats on the backs guys, all round! Thanks!

Wish the conditions were better nonetheless, I will certainly look to catch both acts next time around, still good to see live!
Rating: 4 out of 5 for me
Official websites:
http://www.thesweetband.com/
http://www.aprilwine.ca/
﻿
Posted by cozyal at 1:07 AM No comments: