James Christian – ‘Lay It All On Me’ album review


James Christian – ‘Lay It All On Me’ album review 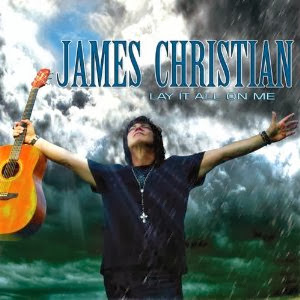 Just who is James Christian, I hear some people saying?

Well, his voice is one I stumbled on, nay, was blown away by back in 1988 when someone introduced me to the band House of Lords and their debut album.

That album and the subsequent HOL project was the brainchild of one Greg Guiffria, ex-Angel keyboard wizard, after his own band Guiffria folded or was forced to fold by a certain Gene Simmons (Kiss), for his new label conveniently named ‘Simmons Records!’

Original demos were made with Guiffria singer David Glen Eisley – Later released as ‘The Demo’s.’ – but the verdict was that Simmons insisted on a new singer too. Enter one James Christian the vocalist at the time that I had certainly never been aware of, joining Guiffria bassist Chuck Wright (Guiffria, Quiet Riot), much travelled drummer Ken Mary and guitarist Larry Cordola (Guiffria), all who contributed to the excellent first self titled HOL album in 1988.
I also saw them open for The Scorpions in 1989 and London’s Hammersmith Odeon.
Loved it!

Subsequent House of Lords albums album’s followed including the wonderful ‘Sahara,’ which was just killer and the magical ‘Demon’s Down’ release in 1992.

Sadly all was not well and over those three releases, there were different lineups and then the band split soon after.
After legal wrangles the band started again, but Greg Guiffria chose not to be a part of it and the next album did not appear until 2004. Sadly, ‘The Power and the Myth’ was a disappointing return, but follow up ‘World Upside Down,’ was much more in keeping with the HOL traditions.
‘Live in the UK’ followed which was pretty good, then ‘Come To My Kingdom’ (2008), ‘Cartesian Dreams’ (2009) and ‘Big Money’ (2011) all impressed me but nothing new has since been released from HOL, but now we have this release from James Christian, who has been the one constant throughout the whole HOL saga.

‘Lay It All On Me’ is the third solo release from James Christian, the previous two ‘Rude Awakening’ (1994) and ‘Meet The Man’ (2004) were both very good releases and to me this is a pretty enjoyable release.

Songwriters involved in this release include session musician Tommy Denander who seems to get in everywhere these days and Christian’s HOL’s band mate, guitarist Jimi Bell. Bell along with HOL drummer BJ Zampa also both play on the album on different tracks too, as well as Christian’s musical wife, the very talented Robin Beck who helps with backing vocals.

Other players include guitarists Jorge Salas and Shelby Stewart, Jeff Kent on keyboards and David Sherman also contributes some drums tracks.
The album cover for 'Lay It All On Me,' could perhaps give anyone who has not heard samples of the album, a steer in the wrong direction.
James is seen holding an acoustic guitar and NOT dressed in his familiar black outfits.
Looking quite casual, someone could be mistaken for thinking this was a folk album, it is not!


Opening with the title track, ‘Lay It All On Me’ the 80’s sound is right there from the get go with the keyboards bass notes leading the track in …
I’m almost reminded of ‘American Heartbeat,’ (Survivor) but since its James Christian and once it gets into it, you automatically think of House of Lords, naturally perhaps but just significantly more commercial.
Much as I love the song, it really sounds like James has tried to capture too many tracks / sounds and it’s mainly vocal, drums, bass, keyboards and it’s lacking in guitar until the guitar solo spots come along that almost sounds Steve Vai like, which kind of makes up for the lack of it overall. Nice!
‘Sacred Heart’ comes across much more HOL like indeed, love it, but the mix / balance again seems a little awash, very keyboard driven AOR indeed, but it’s a James Christian solo album after all and not a HOL release.
Still a very strong song indeed though, I really like it!

Next up brings ‘Day In The Sun’ which has a generally more modern day pop rock theme sound to it, but is a wonderfully strong track indeed.
Love the base line and gentle keys through the verses and then of course the big chorus with big old power chords and a nice if short guitar solo.

‘Believe In Me’ next at first kind of reminds me of ‘Time After Time’ – Yes, Cyndi Lauper – from the intro and once again, it’s got quite a pop rock feel about it, but in a good way.
I really like the song as I do pretty much like everything on here, although the harder rocking fans of House of Lords may be a little disappointed.
I think the strong songs really shine through though.

Next up ‘You’re So Bad’ kind of rocks through the verses, but the chorus is again very pop rock like.
In the end it’s all good melodic rock, the verses even have a slight Whitesnake like feel to them actually.

‘Don’t Come Near Me’ is perhaps more in keeping with the House of Lords rock groove in the verses, but it also sounds quite like its predecessor, very catchy chorus, which of course is something that James Christian has never had a problem writing.

The laid back poppy keyboard sound is again present on ‘Let It Shine’ which appears to be quite the ballad.
Pure pop rock slickness indeed!

‘She’s All The Rage’ wants to rock out so bad and generally does through the verses, but eases back a tad in the pre-chorus and chorus, where the power chords drive the verses, the keys come in to smother the guitars more in the choruses.
It’s still catchy as can be!

The thing is, as I mentioned before James is holding an acoustic guitar on the cover, perhaps hinting that it’s less of a rock album, but there’s still of course so much of a House of Lords vibe about it, but with three of the band’s players, what else would you expect?!

‘Sincerely Yours’ is a mid-paced AOR type rocker and it works as well as anything else here. Still smooth!

With ‘Shot In The Dark’ the guitars drive the song with chugging edgy guitars through the verses, but James sings the song with such a more laid back approach, that it’s like slightly restrained and the chorus doesn’t up the tempo, it just keeps it steady. Again smooth, but it doesn’t really pick up in the chorus as you’d think it might.

Overall, I love the songs and have always loved the guy’s voice, from that standpoint he can’t go too far wrong.

It just does feel like it’s missing a little edge though, so it’s not quite all I would’ve liked to have heard, but still enjoyable.

Hi folks,
Well, here we go again, another quick posting just to let you know yes, Chambers of Rock is still alive and kicking!!!
A great show Saturday before last in Chicago's Arlington Heights area at The Home Bar.
Some seriously great acts and the review is coming, but even from the scribbles of the event organizer, Andrew McNiece it seems Melodic Rock Fest 3 was a success!
Check out Andrew's post for Monday 7th, October:
http://www.melodicrock.com/
A full review of Saturday will follow but here's some highlights ...
By the way ... I did not get to see headline act Harem Scarem .... :(
More on that in my full review, reports that followed though said they great ..., my loss!
For me the great performances on Saturday were - And yes I am biased but ... - W.E.T. featuring Jeff Scott Soto, Erik Martensson (Eclipse) and Robert Sall (Work of Art) and most of the Eclipse band were just great for me ...
Oh to have a recording or DVD of that performance, but I know ... No chance!
Great set guys!
Heaven + Earth I have been waiting to see live for so long, now I know many of you know that I'm friends with Stuart Smith and both Richie Onori and Joe Retta have always been so cool with me too - since meeting up with them all through Sweet performances in Detroit .. - BUT .... I had not seen Heaven + Earth live and had wanted to for so long ..., they did not disappoint!
The set was scheduled to be a short'ish acoustic set, that changed to a full blown electric rockin' performance that blew me away!
Arlan Schierbaum absolutely killed it on his Hammond B3, jamming in such a fashion Jon Lord would've been proud of, climbing all over it too!
It was a short set though, but great to hear.
Stuart and Arlan played so well off each other, Joe's vocal performance, excellent and Richie and Tony Morabito - in for Chuck Wright - just had the rhythm section down great!
Loved it!!!
Stuart - Will that footage show up on DVD?
I cannot deny 7th heaven's performance was impressive!
They did have some clear advantages though ...
One - this was like a hometown gig for them ... They have also already open at Chicago's Soldier Field stadium for both Bon Jovi and Kid Rock, so this was like a walk in the park for them.
Two - They had already played the previous two Melodic Rock Fest events, so were already a familiar live act to the melodic rock community.
Three - They appeared to have brought in a bunch of friends with them, who left after their performance.
Four - Their sound guy was walking through the crowd mixing the sound right there on his active I-Pad ...!  Er, I did hear sampled sounds and vocals too!
All that said, their performance with new singer Keith Semple was full of confidence, no question. Nice one guys!
A very special performance for me, was that of my old pal Steve Newman and his band Newman for their first ever performance on US soil, also this was the first live performance with the band for bassist Joel Peters!
They had a tough spot in the Saturday lineup too, as they had to follow 7th heaven!
Not a simple task, with borrowed equipment and no sound check as I know was the case for the acts coming in from overseas and some of the US bands ... The drum set certainly remained the same throughout, with some of the drummers throughout the day switching out pedals and a few bits and bobs.
It was apparent there were some monitor problems, but they played a great if short set of just seven songs.
Huge kudos to the Brett Walker band guys, as Matt MacKelvie and the guys supported by Jeff Paris and Shawn Pelata (Line of Fire) to name just two, did an awesome job in paying tribute to the late, great Brett Walker.
Incredible job guys, must've been tough ...
Mecca with Survivor's Jimi Jamison sounded very good too, sadly Fergie Frederiksen (Toto / Mecca) was unable to be a part of the event, as he is currently very sick and undergoing medical treatments.
Nice performance led by Joe Vana ... Good job guys!
Adriangale were good, but nothing stood out to me ... Sorry guys, likewise Tango Down and Evolution Eden, who played good sets.
I missed most of opening act The Radio Sun's set, but the tail end of their performance sounded good.
Reviews are coming, just done James Christian, that should edited, formatted and posted in the next day or so, then Robin Beck, Status Quo, The Dead Daises and more!
Thanks for keeping it real folks!
Keep on rockin'!
Al
Posted by cozyal at 7:02 AM No comments: Links to this post