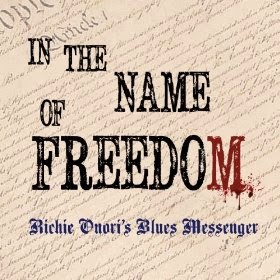 Richie Onori is not your typical frontman by any means, as the guy typically occupies the back seat, as the rhythm section foundation as drummer in both Steve Priest's version of The Sweet and the Stuart Smith led band, Heaven + Earth who in fact Onori has been a part of since their first album.

Having seen Onori with The Sweet on three occasions and with Heaven + Earth - Sadly only - once, he is a more than solid drummer!
Here's the thing though and perhaps to many people's surprise, the guy has actually put out two previous solo releases, the all-star 'Three Wishes' album in 2009 and then 'Days of Innocence' in 2012, prior to this his latest release here 'In The Name Of Freedom.'
This new album actually features two songs from the ‘Three Wishes’ album redone, in ‘American Fighters’ and ‘Come Together We’re the U.S.A.’ which was originally titled simply ‘We’re the U.S.A.’
This latest album was also produced by Dave Jenkins who also twiddled the knobs on the latest Heaven + Earth release ‘Dig’ that Onori was of course a part of. Jenkins also adds backing vocals throughout too.

All the songs presented here were written by Richie Onori and he also sings, plays guitar, drums and harmonica on here.
Not bad huh?
His guests on here include the slick guitarist Phil Woodward, various bass players such as Marvin Sperling, David Chamberlain, Mark Meadows and Will McGregor, Dave Jenkins also adds some Hammond B3 work and keyboards, also helping out on Hammond is Dickie Sims and John ‘J.T.’ Thomas, as well as Jon Greathouse on keys too.
On Sax Chris Mostert, Trumpet work by Bill Lamb, Mark Josephson on violin and the list goes on with many more including a whole host of background singers - Sorry I didn't include everyone's name, on credits alone I could've gone on quite a bit! - so you get the picture, a lot went into this folks! Phew!
To open the album Richie has a recording of some crowd demonstration, protest or similar to tie in with the songs title and it’s apparent message, ‘Power To the People’ also includes a version of what Jimi Hendrix did with ‘Star Spangled Banner’ and what sounds like a bunch of 'young un’s' chanting a little sarcastic dig perhaps, with instead of ‘God Bless America’ or similar it's ‘God Bless G.E., God Bless Citigroup ...,’ you get the picture I’m sure.
Richie’s vocal here is considerably edgier than on his last album, ‘Days of Innocence’ which was what he had told me was his intention with this album last year, when I chatted with him before a local Sweet gig in the Detroit area.

It’s certainly a much rockier affair from the get go this time around and I like it!
‘Power To The People’ is like a rallying of the troops call, for people to stand up for what they believe in and not be pushed around and it really has a lovely hook guitar riff that pops up again and again, edgy and a sweet lick!
It’s an album that has quite a retro type feel and sound to it indeed, but in a refreshing kind of way.
It’s quite possible that people may not be too sure of Richie’s vocal, but it’s kind of unique and cool to me.


‘Hey You (You’d Better Think Again)’ is next and again there’s a message to the song.
It’s kind of a funky rocking groove on the opening two numbers, that may not grab you right away, but really got my attention to want to listen to it again and then again. It’s got something, that’s rocky yet perhaps a little eclectic.
Sorry Richie, you may not like this but ‘Long Live Rock’ next has a real retro Alice Cooper type vibe about it right down to the opening line, ‘I turn it inside out, You’ve got me under my wheels …’ Ha! I love it Richie!
That said the chorus line doesn’t follow the same path and it’s a pretty basic, straight forward catchy chorus.
I love the intermittent guitar wailing throughout though, tasty playing.
Something also that Richie has in abundance throughout the choruses is big harmony vocals.

‘American Fighters’ next has an almost Little Steven meets John Mellencamp feel to it, some Americana I guess, a little like the old Cat Stevens track ‘Cat’s in the Cradle’ to a certain extent too
Clearly another rallying song as well..
It’s one of those songs too that when you hear it, I’d go so far as to say if this suddenly got a little radio play, it could really get people’s attention and a chance that maybe, just maybe it could be a hit. When you hear it, you’ll know exactly what I mean.
A song for the traditional American Indian next in ‘Buffalo Nation’ that again has perhaps more of that retro Alice Cooper – ‘Go To Hell’ – groove to it and a wonderfully soaring female vocal at one point too.
It has a solid chug along groove throughout, even with maybe a nod to Pink Floyd with the songs layers throughout.
The project title song next in ‘Blues Messenger’ introduced with some underlying B3 and some melancholy acoustic guitar and then it kicks into a rocking groove briefly, before easing back a little through the second verse.
The chorus is driven with some funk rocking B3 and once more big choral vocal, borderline gospel.
This was what I meant about the eclectic feel to the album too.
It certainly has it’s rocking moments, but some soulful ones and Americana throughout.
It is a retro vibe without any doubt, but what Richie has captured here has a kind of uniqueness about it that makes it interesting to want to listen to it again and – for me – again.
‘In The Name Of Freedom’ brings to mind Bob Marley, with its sub-reggae groove not really my bag, but it’s message and vibe just really kind of ties in with I think Richie was looking to achieve with the overall feel / vibe of the album.
Alright, ‘Come Together We’re The USA’ is a monster groove and I totally love the buildup intro and then it gets into its stride and it’s a track that has a lot going on throughout musically and vocally.
It’s kind of like the album’s epic track with it’s up, down changes throughout.
I kind of get the sense that maybe this is Richie’s (Bruce) Springsteen album, with its vibe throughout and the various messages that go with that.
‘The Answer’ is the final track here and it’s certainly an up-tempo number and once again a big vocal harmony chorus, but it’s got a nice groove throughout, some wonderful B3 jamming once more and is rocking closer.

As I’ve already mentioned before, throughout the album there is no question that Richie and his friends want to share a message or two with us all, so yes there is that to it which may perhaps put off more of the rockers that follow Richie when he plays with The Sweet or Heaven + Earth, but if your taste is a little more open minded then maybe try this.

My references to similarities to other songs / artists throughout, is the same with this album as it is with any other review I do, as often friends ask me ‘So what’s that new album from so and so like?’ If I simply say it’s really good or it rocks or even, it’s not for me, then they come back with yeah, but does it sound like anything or anyone else?
So I never mean to insult any artist when I cross reference anyone else, I’m simply giving them a little pointer in my view.
I think Richie is a great guy, solid drummer and based on this album, not too shabby on the guitar either!
Some people may not get his voice at once, but give it a chance with the sound he has here, you just maybe glad you did!

I love the albums he has played on, but as with many musicians there comes a time when they just want to do their thing and I thing Richie has more than earned that right to do just that.
With this album, he certainly gets my vote!
Rating: 4 out of 5

http://richieonori.com/
﻿
Posted by cozyal at 11:56 AM No comments: Links to this post