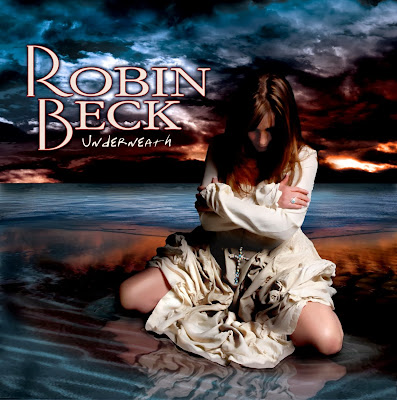 Robin Beck put simply is one phenomenal talent! There, I said it!
Back in the late 80’s she came to many Europeans attention with her number one solo hit, ‘First Time’ in 1988 in the UK and in 1989 in Germany, the song of course got there through its frequent use in a Coca Cola TV ad at the time, which was like serious power-play for the artist!

Sadly in the UK the success did not continue - I have no idea why?! Probably marketing or lack of it! - but Germany seemed to welcome Robin with open arms and more hits followed there for a while, but then seemed to dry up.

She has continued to release albums to critical acclaim generally although lacking in commercial success, it certainly seems that today, the melodic and hard rock community loves her. Whether the fact that she is married to one James Christian, vocalist with House of Lords has any bearing or not I don’t know, but her voice more than stands up for itself and needs no moral support from anyone!
That said, he did produce the album and perhaps that actually goes a long way as to why this is so good!
Most of the songwriting here has been done by Robin, James and Tommy Denander.
The talent she has, allows her to show quite a range and variety on the material she wants to present, while easily matching the best rock vocal efforts of say Cher or even Ann Wilson in each of their primes and kind of giving the likes of pop rockers Kelly Clarkson and Pink a good run for their money!
The opener ‘Wrecking Ball’ gives the impression perhaps of initially a pop rocker but then rocks out like as strong as some of the best commercial rockers that Bon Jovi could put out there.
Punchy heavy edged riffs through the verses, yet such strong melodic lead and harmony vocals throughout the choruses.
Magic stuff, really, really strong opener, great job Robin!
‘Ain’t That Just Like Love’ next starts with an almost AC/DC like riff, but then the song grows into a monster strong commercially catchy song, the chorus is just huge, which is a common factor throughout the album. Love it!
My earlier comparisons perhaps to Pink and Kelly Clarkson are perhaps strongly justified first with ‘Sprain,’ which is again another hugely catchy chorus driven song and something that perhaps I’ve failed to mention so far is that Robin sings with a kind of swaggering attitude. Does that make sense? I mean everything she’s singing comes across like she’s telling the listener, ‘Look, don’t mess with me, I’m deadly serious on what I’m telling you in these songs.’
Title song ‘Underneath’ really moves me and gives me goose bumps every time I hear it and it perhaps it gives a little nod to Heart in its structure and overall sound and that’s no slight at all, it really goes on to emphasize exactly what I’m saying about the pure strength in Robin’s performance. Absolutely fantastic!
‘Catfight’ next … I really wasn’t sure what to make of this at first, as it’s hugely pop rock in its style, but it almost has a bit of a punky like attitude about it. Kind of funny and makes me chuckle a bit when you really pick up what the lyrics are saying. Now I just love it!
The almost punky edge kicks in again with ‘Check Your Attitude,’ which sounds like something I bet Kelly Clarkson wishes she’d done.
A very catchy tune with quite an edginess to the song.
Next up Robin does a duet with husband James Christian on ‘Burnin’ Me Down,’ which is kind of a borderline power ballad, laid back rocker and it’s superbly done.

‘Perfect Storm’ next gets right back to the rock and it’s loaded with some great harmony vocal lines and of course a killer lead vocal delivery from Robin. An absolutely killer lead break here too, nice one!

Possibly the catchiest song on here next, but it’s hard to say that outright as there’s so many strong songs on here, but I guarantee that ‘Ya Can’t Fight Love’ will have you singing it again and again, it’s truly a great up tempo hook laden rocker!
In REAL power ballad style comes ‘I Swear The Nights’ next which at times also gives me goose bumps, I mean come on, I mean two big songs that give you goose bumps on one album, doesn’t that alone speak volumes?!
It kind of reminds me a little of Cher’s ‘Just Like Jesse James’ at times.
Very, very strong indeed, a winner in my book for sure!

‘Follow You’ is a great album closer as it’s just as strong as anything else on here.
Love it!

This album, no question at all is an absolute success if you ask me, I really do love every track now even if a couple took a couple of double takes, eventually they got me too.
Avoid this at your loss, Robin Beck is outstanding on here, no question, now how about some live dates in the US?
Rating: 5 out of 5