So what did you do on your Saturday night? Well, a couple of weeks back, I went to check out Steve Miller and his band!

Last time I saw him was probably about five or so years back now, so when a good friend asked Rhonda and I if we’d like to go with them, who was I to say no, right?
It was a great night for a show, conditions a little cloudy but all in all, not bad.
We missed the opening act, but I understand it was a female folk singer, but I didn’t catch her name …
Steve Miller’s stage set was not too elaborate, it was kind of what looked like a ships mast at an angle with some lights on but then it’s Steve Miller and he’s really all about the music. 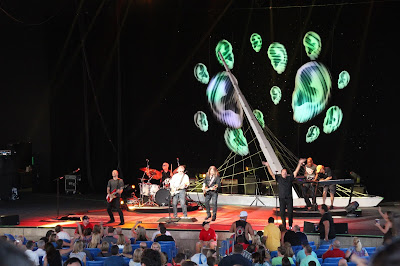 The band opened with ‘Jungle Love,’ a familiar tune that gets everyone out of the bar areas pretty quick, we’d already taken our seats though, quite a ways back, a little to right of centre as you look at the stage but too not bad and the sound was pretty good too. The only down side for me was this young lad around aged about eighteen to twenty and his buddies, who appeared to have perhaps had a little too much ‘sugar’ – ahem! – or something and he and the guy directly next to him just kept on talking for most of the show, loud enough so that they made sure they could hear themselves over the band, nice … Not!
The seats were probably as full as it was going to get, about half to two thirds full by the time ‘Take The Money and Run’ started next.
Two good opening songs to have got the evening going! 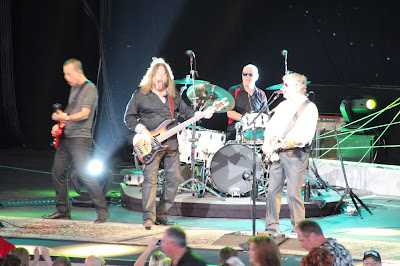 Steve and the boys jamming! - Photo: Gary Shaw
‘The Stake (Nobody Loves You Like The Way I Do)’ was next and it jams not unlike say ‘Rocky Mountain Way’ in places if you ask me, but overall it’s a good number to those who aren't familiar with it.

The good songs just keep coming with another hit after hit when Steve first talks to the crowd saying, ‘How are you doing guys? Here’s a little magic for you,’ which then introduced ‘Abracadabra,’ and crowd just lapped this all up!
Steve then introduced the guy who then proceeds to share most of the lead vocals for the evening Sonny Charles.
What a great voice too, he totally did the songs justice. Then Steve says, ‘We’re going to do some songs from ‘Bingo’ now. This is a Bobby Blue Bland song ‘Somewhere Further Up The Road,’ that we’d like to play for you.’
It was a real blues jam, that the band got some audience participation going with and Sonny say, ‘We’ve got some singers here Steve, are you guys ready to sing?’
Big cheers follow …
That would be a yes methinks!!
Next track I understand was ‘Ooh Poo Pah Doo,’ then it’s onto an Otis Rush tune, ‘All Your Loving,’ which is a very laid back number generally, kind of reminded me a lot of Santana’s ‘Black Magic Woman,’ although then I heard someone else say, ‘This sounds like Hawaii Five-O!’ I didn’t think so, but there you go!
Steve’s guitar work on this was very Santana like if you ask me, nicely done.
‘Are there any jokers out there?’ asks Steve, "This is from The Joker album, in fact it was our opening track, a song called ‘Sugar Babe,’ " which sounded great to me! 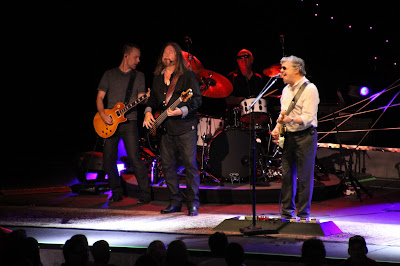 
‘This next song we’d like to play, is about a girl from Detroit. It’s called ‘Mary Lou.’’


As I looked around the venue at this point, there still seems to be quite a few empty seats, mostly on the left side of the pavilion.
“I’d like to dedicate this next song, it's called ‘Shu Ba Da Du, Ma Ma Ma Ma,’ to my old friend Carlos Santana. We used to hang out a lot back in the early 70’s … It’s another track from our Joker album.”
It has a nice bass run in it and once more Steve’s guitar work is great and I can totally understand why he dedicates the song to Carlos!

The crew bring out a bar stool for Steve, as well as an acoustic guitar. He says, “From The Joker …, this is ‘Going To the Country.’”
He also played a little harmonica in it, so you get the idea it’s pretty much an acoustic blues like jam. 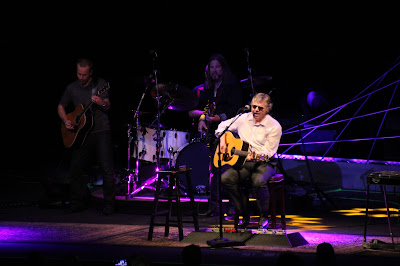 
To introduce the next song, Steve says, “This is the last song we’re going to play from The Joker album, and it’s actually the albums last track!
I’d like to bring out an old friend from Nashville next to play some real pedal steel guitar, because as talented as my band is here, there’s no one that can really play it right, but this guy can!”
The song we get is ‘Something To Believe In.’
Sadly I did not get the guy’s name …. 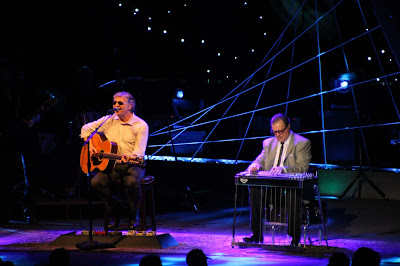 Some great pedal steel guitar from Steve's friend from Nashville! - Photo: Gary Shaw
﻿
It really seemed by this point, that the show had really got pretty melancholy, as the applause tended to be just a little too polite and while there are some screams and cheers, it had mellowed down significantly!
Just the same, he asks his Nashville buddy if he wants to play another …
Why not I guess …?!
‘Dance, Dance, Dance,’ is another tune that came across as a very country style tune.
Back to the better known tracks for the crowd, with ‘Fly Like An Eagle’ next which of course garnered huge applause when it started.
The keys guy – Sorry, Steve's band introductions did not come across too clearly … - really jammed some killer, monster Hammond like riffs on this and then Steve himself played out some great licks once more! 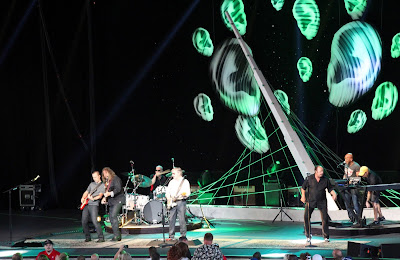 Next tune, ‘Serenade’ was perhaps not so well known next, but then ‘Jet Airliner’ got everyone back into it big time!
My favourite Steve Miller Band track ‘Rock ‘n’ Me’ closed the main set and then the band left the stage, but not for long.
Back they come to close out the evening with encores in the shape of ‘Swingtown,’ ‘Space Cowboy’ and final song of the night ‘The Joker.’
This was a pretty fun night. The photo’s I took, just really weren’t good enough as we were so far back.
So, my thanks to LeeAnn for the invite
Thankfully Gary Shaw provided me with all the attached photo’s, thanks Gary!
Rating: 3.5 out of 5 for me.
Website: