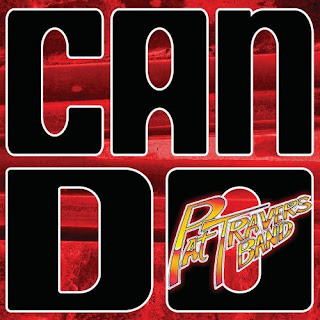 Pat Travers has had my attention ever since I first heard ‘Boom Boom (Out Go The Lights),’ the then leadoff single - And probably best known song to date! - from his magic ‘Live! Go For What You Know’ album, recorded during his ‘Heat In The Street’ tour.
The b side to that single was his excellent live interpretation of ‘Stateboro’ Blues,’ - Not included on the then live vinyl album. - the Blind Willie McTell jam, that is best known done by the Allman Borthers, but Pat’s version just knocks that for six! - IMHO!
After getting the live album under my belt, I went out and immediately picked up his classic albums prior to the live release, starting with ‘Makin’ Magic,’ then ‘Heat In The Street,’ ‘Pat Travers’ and ‘Puttin’ It Straight.’I soon realized that my interest in PT was well justified when I discovered that Thin Lizzy guitar players Brian Robertson and Scott Gorham both played guest spots on two of those early albums – ‘Makin’ Magic’ – Brian Robertson and ‘Puttin’ It Straight’ – Scott Gorham.

Subsequent studio albums followed the live release in the shape of ‘Crash and Burn’ the album that included the strange choice of cover in Bob Marley’s ‘Is This Love,’ plus a bunch of synths on the album that threw some fans, but was supported by a London (UK) live show, where I caught my first PT live show and loved it!
He also played the Reading Rock Festival soon after the London gig.

‘Radio Active’ followed and was OK, pretty good but it seemed to lose some of PT’s earlier rockin’ momentum to a degree, then came ‘Black Pearl’ which although it included another Marley cover in ‘Misty Morning’ it had some real gems like ‘Who’ll Take The Fall,’ ‘Stand Up,’ ‘The Fifth’ and more.
I loved ‘Black Pearl’ and being a fan of melodic rock / AOR I was longing to get a copy of follow up ‘Hot Shot’ but the import prices at the time were nuts and subsequently I could never find a copy of ‘Hot Shot’ at a reasonable price - Still can't today! - so never did hear the album ….

I guess what I’m trying to say here is I’ve always loved PT’s music for what it was, although many rock fans don't like his voice so much, but I think it works great with what he's playing and even with some of the funky twists he took on ‘Crash and Burn,’ ‘Radioactive’ and kind of ‘Black Pearl’ I took it and it grew on me.

After that, PT really went back to more of his blues roots and I kind of lost touch with a number of subsequent releases – Let’s say at least ten of them! – until the live ‘Stick With What You Know’ release which was great!
I did catch the Pat Travers Band live in the UK, probably two or three times in the 90's and live, it was still an enjoyable show.

Another blues release in ‘Travellin’ Blues’ followed, then the enjoyable last studio album that I got ‘Fidelis.’
Note - 'Fidelis' album review here:
http://chambersofrock.blogspot.com/2010/08/pat-travers-fidelis-cd-review-released.html

‘Blues on Fire’ in 2012 I didn’t get, nor the ‘Live at the Bamboo Room’ release, but ‘Can Do’ is perhaps about to get PT noticed again!

It certainly seems that with this album, Pat’s kind of targeting a shift from the more blues driven hard rock he’s best known for, to a more commercial melodic rock angle for the most part and that is fine, but the end product isn’t all it should be to me ...
Being on the Frontiers label should’ve swung this the right way and song wise it’s good, very good IMO and I’ve seen comments on the vocals not being so good, well, Pat’s been doing this a long time now and his style leads to a rougher edge, so yes maybe they are a little rougher than previous releases but it still in the PT realm for me.
Opening with title track ‘Can Do’ it comes across as perhaps a more commercial direction for PT but as I mentioned the production feels it’s lacking a little something.
I actually like the song but the key the song is in seems odd with the phrasing and as an opening title track, it’s doesn’t perhaps seem as powerful as it could’ve been.
Still good and grows for sure, but takes a little getting used to, getting into.
‘Stand Up / Give It Up’ next tries to play more so on his blues rock styling’s and his voice does sound rougher as this song goes on actually, but it’s a good groove.
I think ‘Diamond Girl’ is a great commercial track in a radio friendly style, great melodies on this one, nice shared melodies on the guitar from PT and the equally excellent Kirk McKim.
Next ‘As Long As I’m With You,’ contains some nice slide guitar touches, with some great backing guitar harmonies and the solo is just class, the song is in a slower groove with an underlying dirty riff. I would add though, that the actual song line, where Pat sings, 'As Long As I’m With Yoooou,’ does become a little repetitive though.
Boy does the harmony / chorus line of ‘Long Time Gone’ remind me of something else …?! Nazareth’s ‘Gone Dead Train’ possibly ...?
It’s a song that creeps in with a screaming, repeating guitar line then builds into the chorus to get it going.
The chorus though is just so catchy, whereas the verses are more dirty, stop start edgy, kind of staggered then the pre-chorus brings things back in and the chorus just kills!
The guitar solo is another killer too and these days PT is happy to share the lead work with the hugely talented Kirk McKim and they do this so well, bringing back some memories of the Pat Thrall days!
Long time drum buddy Sandy Gennaro is as good as ever and along with Rodney O’Quinn on bass, they’ve got things down well.
‘Wanted (That was then / This is now)’ has a haunting vibe to it, almost Bad Company like at times and it’s really got something, but there is one really cheesy line in it, ‘Oh man, I sure wish I had a nice cold beer …,’ that I’m thinking, come on Pat really, but then that’s the humourous angle that PT often likes to throw into his songs for ya!
It’s funky time next and more slide guitar on ‘Armed and Dangerous’ which is certainly another tongue in cheek funny twist song. It almost has a Lynyrd Skynyrd like twist about it actually, fun times PT!
Next song, a cover of the Eurythmics ‘Here Comes The Rain (Again)’ really threw me a curve ball … Strange kind of choice ...
At first I thought, no please, but it has come to grow on me.
This is a song that again I wish the overall production was better on, the distortion in sound here and there just isn’t good …

After the last song, I began to think what next and ‘Keep Calm and Carry On’ is a nice instrumental that begins initially, well not unlike The Police’s ‘Walking on the Moon,’ but then develops its own identity, although a little spacey the instrumental has some really nice lead work, some nice harmonizing kind of like a bluesy Thin Lizzy. Nice!

‘Dust and Bone’ comes next with a real blues groove, some nice slide guitar, laid back generally, kind of cool, almost funky but still with a rockin’ groove to it.
Keeping with a bluesy style, ‘Waiting On The End Of Time,’ but then it’s almost not unlike some of David Lee Roth's fun sing-along kind of material before it then provides an absolutely ripping killer solo, then back in the fun time tune. Go guys go!
Closing track ‘Red Neck Boogie’ is more or less self-explanatory and when you hear it you’ll know what I mean. Rock ‘n’ Roll boogie woogie, honky town grooving number.
Good times PT!
It is an enjoyable new album from the Pat Travers Band, nice to see that classic PTB logo on the cover too, some nice songs, interesting cover version, but overall it's in a style that should please many in the PT fan club!


The only downer for me is the overall final mix, which at times I just wish it was better, it just doesn't sound as good as it should be, but direction wise, I like it though.