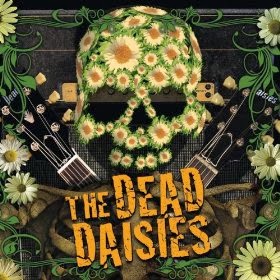 Yes, this is another album that I’m more than a little behind on getting it wrapped up with the release date ... Sorry, but that said, it seems it's release date seems to have been staggered all around the world and so maybe it's not all that old to everyone!

The Dead Daisies – That name, still not sold on … - is a band that was formed around ‘former’ Noiseworks / INXS lead vocalist Jon Stevens, who’s voice may not be everyone’s favorite, but I liked Noiseworks since back in the 90’s so it’s fine by me.

Clearly there’s some talent involved in this project, that has switched out the rhythm section already, as they have already had ex-Thin Lizzy, Whitesnake, Ted Nugent bassist Marco Mendoza onboard for a while and also drummer Alex Carapetis (Nine Inch Nails, Julian Casablancas).

The guys also roped in Slash (Guns ‘n’ Roses, Velvet Revolver) to co-write and play on the first single released from the album, entitled ‘Lock ‘N’ Load’ and Slash distinct sound is clearly present throughout.


It’s a strange kind of mixture of tunes, not bad and certainly enjoyable perhaps with Jon Stevens influence it’s not that far removed from Noiseworks at times, no bad thing in my book.
‘It’s Gonna Take Time’ kicks things off here with some urgency and is rocky and almost a little punky too in its punchiness, that eases back for the chorus a little and there’s even a part that reminds me of Pink Floyd’s ‘Time’ for a moment in the bridge section.
Clever track, with a few turns this way and that.
The Slash featured track, ‘Lock ‘N’ Load’ is next and it has a great commercial groove to it, almost bordering a hint of blues with Slash’s style. Nice!
Solid enough tune.
The single ‘Washington’ is next and to me perhaps gives a little nod towards the old classic track ‘American Woman,’ it’s certainly got a funky kind of groove about it. I like it!
I love the keys work from Dizzy Reed, very Faces like, nice touch!
‘Yeah, Yeah, Yeah’ really kind of reminds me of that Americana sound that John Mellencamp or Tom Petty sometimes tends to lean towards, but it’s got a certain tongue in cheek feel to it and an almost (Rolling) Stones like laid back groove too.
Rock ‘n’ roll baby!
I love the melancholy feel about ‘Yesterday,’ it’s a really nice track. Kind of has a laid back Stonesy feel to it too and it seems to grow from a laid back number into something much more!
‘Writing On The Wall’ next is quite a laid back atmospheric number, still of course with a cool groove which it seems is something that comes quite naturally to Jon Stevens in his writing … Er, no pun intended here!
Just after the midway point, there’s a little bridge that picks it up a little before easing back into the original groove.
Back to the more pop / rock punch with ‘Miles in Front of Me’ next, it’s not unlike opener ‘It’s Gonna Take Time’ at all, very similar indeed at first and then the chorus is a wonderfully smooth melodic groove. Nice, very catchy indeed!
Some nice guitar flourishes too.
‘Bible Row’ is a little pop / rock / new wave number in style, quite up tempo and Dizzy Reed’s keys shine through a little more, and it’s got a nice groove to it too. Kind of a grower tune that may not get you right away, but as the album grows on you from a few more plays this one should too.
Next track ‘Man Overboard’ was actually I think the first song I heard from these guys, as a free download offered some time back.
It’s a little off the wall perhaps, a little atmospheric with some punchy elements, but it’s like it never really gets into any pick up groove, but I still like it. Possibly this is down to how many times I’ve heard it!

With ‘Tomorrow’ next I hear quite a bit of a Noiseworks feel about it. Jon Stevens vocal has an edginess in it throughout the verses, laid back musically it tries to remain a little restrained, then in the chorus there’s even more smoothness to it.
He almost sounds a little like Seal in the choruses actually, nothing wrong with that.

Sub-power ballad time next with ‘Can’t Fight This Feeling’ and no, it’s not the REO Speedwagon tune of the same name!
It’s a nicely, almost Beatles’esque piano driven number.
I like the little whistle part that tags along with the guitar solo, it’s different and overall the song has a certain magic to it, that makes you think ‘hit single’ about it with enough plays, but what do I know ..?!
Final track here is ‘Talk To Me’ and it’s quite an edgy number without getting too heavy.
An interesting bridge that takes it down a little before getting back into its groove once again and then it wraps up the album.
It’s an album that I can quite happily play again and again and not get tired of at all.
There’s points where it’s really catchy, others where it seems a little eclectic then it’s edgy too and also has it’s lulls, so it bounces around quite a bit.
I haven’t played any of my Noiseworks stuff in quite a while, so to hear Jon Stevens once again was a great reminder of the kick I got when I first heard them, time to dig some out again!


Does this sound like Noiseworks though? Well, with Jon’s vocal it’s hard not to draw some comparison, but Noiseworks switched things around quite a bit too so ... If you liked Noiseworks, you make up your own mind.
It is an album that certainly takes a few different twists and turns here and there, that are maybe a little different from Noiseworks, so to me it’s fresh and I kind of like it!
Is it out and out stunning, well …, that’s down to the individual of course and it’s not quite stunning for me, but it does have a refreshing kind of vibe.

http://thedeaddaisies.com/
﻿
Posted by cozyal at 12:47 PM No comments: Links to this post