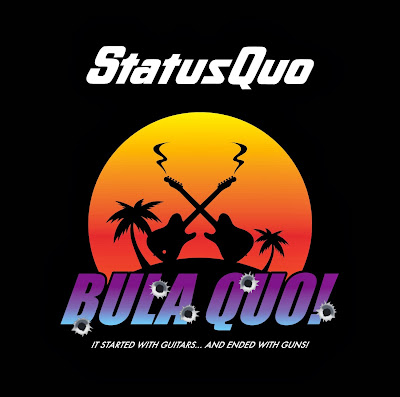 OK, sorry, I know this was released a few months back now, but I didn’t get my physical review copy until mid-August and when I did get it, it was right around the time when I’d already got a bunch of other review items in, some that you’ve seen and some that …, well, LIFE has not allowed me to write up …
Status Quo in England are put simply, a way of life for so many rock fans over there, they are hugely successful there and in various parts of Europe, as their live shows become almost like family reunions! Great fun!


A ‘Quo gig’ you’ll find is often attended by such a variety of age groups, well basically from like 8 – 80 years but it wasn’t always that way, but they have been having hit singles since the 60’s so there you go!
How do they do it?
They stick with the same twelve bar boogie style formula in their sound - For the most part. - much like ZZ Top does here in the US, but for Quo it’s in a cleaner form.

Quo also went through a few albums of almost – And I hate to say it … - mediocrity which segregated to a degree many of their hard core fans from their 70’s and early 80’s releases.
That said, I think in recent years they have clawed a lot of them back, with some pretty good releases.
The band has been through many line up changes too, although the two mainstays, are the band's two main front men, Francis Rossi and Rick Parfitt.

Certainly this albums' two predecessors ‘In Search of the Fourth Chord’ the last ‘Quid Pro Quo,’ were both good ‘un’s to this old Quo fan!

I first saw Quo live in ’79 and then saw them live on something like ten different occasions.
As I said before, a Quo live gig is quite the entertaining event, such a shame that they’ve not been so warmly received over here in the US … And they have tried touring here on more than a few occasions...
So, to the album and this is effectively Quo’s .., are you ready for this? Thirtieth studio release!

Admittedly ‘Bula Quo’ is essentially the soundtrack album from the band’s first ever feature film that stars the band as themselves in an entertaining situation, in a dramatic yet funny kind of action film.

Perhaps the comment on the album’s cover, below its title, ‘It started with guitars… And ended with guns!’ gives a little pointer.
The trailer I’ve seen through You Tube looks quite amusing, but I’ll wait until I’ve seen the final product before making further comment on the film.
Trailer clip here:
http://www.youtube.com/watch?v=GO2hM7UXZqE

The album itself actually for the most part is pretty good, except for - IMHO - ‘Mystery Island’ and the title track itself, I don’t know ..., I mean I understand it’s purpose with the film, location / setting and the soundtrack, but it’s really not true Quo and ‘Fuji Time,’ I’m a little undecided on, cheesy, but that said I’ve really enjoyed the rest of the album.
It even comes with a second disc entitled ‘Bonus Film Soundtrack.’Obviously I don’t know how much a part of the films soundtrack it really is, but to be honest, who cares? It’s a bonus disc!
Opening with a very typical Quo style, ‘Looking Out For Caroline’ gets the band right off to a winning start. It is a strong Quo opener.
From what I understand of the movies storyline, ‘Go Go Go’ is very apt for the band to be running away from the villains in the story.
It’s a great fun, edgy style song with a really nice guitar solo too.
‘Run and Hide (The Gun Song)’ has a heavy edged riff to it and then once the song kicks in it has more melody, it also features the songs writer, bassist John ‘Rhino’ Edwards on lead vocals which makes a change, yet doesn’t feel out of place.
Next ‘Running Inside My Head’ brings back the familiar Rossi led Quo style, interesting start leads to a familiar Quo driven twelve bar winner, that was written by Quo’s now former drummer Matt Letley, who made the decision to quit the band and make this album his last Quo contribution.
I really like it, great song.
The whacky laid back Rick Parfitt sung ‘Mystery Island’ is next and it’s got that Fujian, South Pacific style, almost Caribbean style to it and if Quo fans thought ‘Living on an Island’ was a little lame or even ‘Margarita Time,’ then this will surprise you anew!
Not my cup of tea at all, but I do understand it’s association with the film.

‘All That Money’ features Parfitt again but this time getting back to the rock and although these days he definitely sounds like he’s straining some, I like it.
The riff does sound familiar though, although I can’t put my finger on what it reminds me of. No worries …
An Andy Bown written song next, ‘Never Leave A Friend Behind’ still falls into the classic Quo sound, twelve bar with plenty of vocal melody and harmonies. Nice one chaps!
The sub reggae styled ‘Fiji Time’ actually almost reminds me a little of ‘Tears of A Clown.’It also kind brings back memories of the UK’s Two Tone Ska era, which at the time was so NOT Quo and it really doesn’t sit quite right with me.
Again, I do understand the connection to the film ...
The last track here of the new studio songs is the title track ‘Bula Bula Quo (Kua Ni Lega)’ which although it gets into a sub twelve bar riff, it’s still a little kind of cheesy like.
It’s OK, prefer it to ‘Fiji Time’ or ‘Mystery Island,’ but it’s not great.

Interesting point here, the ‘Bula Quo’ album was jointly produced by Francis Rossi and Rick Parfitt, with Francis doing six of the tracks and Rick doing three.
The bonus CD features a ‘Fiji style’ version ‘Living On An Island,’ – Come on Rick, you’re really getting soft mate! -  plus a couple of great tracks from the last Quo album ‘Quid Pro Quo,’ in the shape of ‘Frozen Hero’ and ‘Reality Cheque,’ both excellent!
Next it’s a redone, extended version of ‘Rockin’ All Over The World,’ given the ‘Bula’ treatment and sounds good!
Then it’s bunch of live tracks that fans may or may not have got their mits on before …
Two from their ‘Live at Montreux’ show in the shape of ‘Caroline’ and ‘Pictures of Matchstick Men’ and then ‘Beginning of the End,’ ‘Don’t Drive My Car,’ ‘Whatever You Want’ and ‘Down Down’ all live 2010 tracks.
All in all, it's a pretty good package with the bonus stuff making up for what I didn’t really enjoy on the ‘Bula Quo’ disc.
I guess I really need to keep in mind that it IS meant to be considered a soundtrack release.
The DVD / Blu-Ray of the movie will be available in the UK this coming week, this CD set was released a few months back now. Time just slipped away from me folks, sorry.
Quo fans will of course buy it, that’s what Quo fans do!
The average Joe, well, give it a go maybe for you you’ll enjoy the variety in the release, I’m looking forward to seeing the film!