OK folks, this is it ... Last update for possibly a week, who knows?!
Anyway, out of here and heading back to the UK for a short time.
Look after yourselves, be safe in all you do and above all, keep on rockin'!
Catch up soon folks, Cheers,
Al 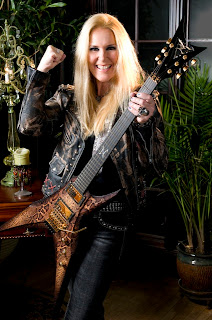 On Tour This Summer With Def Leppard and Poison
Legendary female metal icon LITA FORD has confirmed the release date for her new album Living Like A Runaway.  The album will be released June 19th in North America via SPV/Steamhammer.  The album will be available in four configurations: a double LP, limited edition CD, standard CD and digital download.
LITA gave an update on Living Like a Runaway:
"This CD is truly a dream come true.  It took me one year to write this CD along with Producer Gary Hoey and song writing Partner Michael Dan Ehming.  We have dumped out hearts and souls into this amazing CD.  Along with a lot of tears, pain, heartache, laughter, ripping out hair, going hungry,losing sleep and a lot of frequent flyer miles.  :) !!!
Living Like a Runaway, is like being able to walk through fire and coming out the other side unscathed."
Coinciding with the album's release, LITA is hitting the road this summer with Def Leppard and Poison on the "Rock of Ages Tour".  The dates for the first leg of the tour have been announced and are listed below.  More dates are expected to be announced soon.
LITA is looking forward to the tour and getting to play the new songs live:
"We are honored with this awesome tour and being able to play with these brilliant musicians.  So strap in tight, it's going to be one powerful journey."
Best known for her work with The Runaways and her solo career, featuring hit singles "Kiss Me Deadly" and the Billboard charting duet "Close My Eyes Forever" with Ozzy Osbourne, LITA is ready to make a return to the throne as the queen of metal.
LITA FORD on Tour With Def Leppard and Poison:
6/20: Salt Lake City, UT @ USANA Amphitheater
6/22: Irvine, CA @ Verizon Wireless Amphitheater
6/23: Las Vegas, NV @ Red Rock Amphitheater
6/25: Denver, CO @ Pepsi Center
6/27: Kansas City, MO @ Sprint Center
6/29: Atlanta, GA @ Aaron's Amphitheater at Lakewood
6/30: Tampa, FL @ Tampa Bay Time Forum
7/2: Cincinnati, OH @ Riverbend Music Center
7/3: Nashville, TN @ Bridgestone Arena
7/6: Cleveland, OH @ Quicken  Loans Arena
7/7: Detroit, MI @ DTE Energy Music Theater
7/10: Baltimore, MD @ Merriweather Pavilion
7/11: Newark, NJ @ Prudential Center
7/13: Wantagh, NY @ Nikon at Jones Beach Pavilion
7/16: Montreal, QC @ Bell Centre
7/17: Hamilton, ON @ Copps Coliseum
7/19: Chicago, IL @ Allstate Arena
For More Information Please Visit:
http://www.litafordonline.com
http://www.spv.de
Europe Added to UK Download festival
Swedens favourite rockers Europe, have now been added to the UK's Download festival taking place at Donington Park in June. 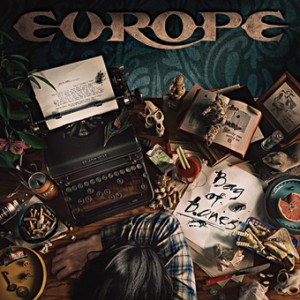 Europe, who are due to release their latest album 'Bag of Bones' in April, currently have a new single out called, 'Not Supposed To Sing The Blues.'
I have to say I think it's a great track, reminding me of Thin Lizzy a lot in places, certainly through John Norum's excellent guitar work.
It is also staying on track with their material from previous album, 'Last Look at Eden,' Joey Tempest and the guys sound really on form.
Good stuff chaps!
You can pre-order the album here:
http://www.europetheband.com/europe_albumpreorder.html
The band will play on the second stage at Download on the Friday evening, 8th June, on the same day that Slash will headline the second stage and the 'freaky' Prodigy, will headline the Main Stage. How sad ...
On the same stage as Europe though, will also be, Terrorvision, Little Angels, Nighwish, The Quireboys and Opeth.
The Sunday lineup has Black Sabbath headlining, scheduled to be Tony Iommi's only UK appearance this year, as he continues to undergo treatment for Lymphoma.
Keeping it a very heavy event, the Sunday bill will also feature Soundgarden and Megadeth, as well as Black Label Society amongst others.
Metallica will headline the festival on the Saturday night, 9th June, with Biffy Clyro (What?!) and Tenacious D, alongside Steel Panther, Trivium and Saxon to name a few.
There's no question that this years Download festival will be one of the heaviest ever!
Phew! Earplugs anyone?! 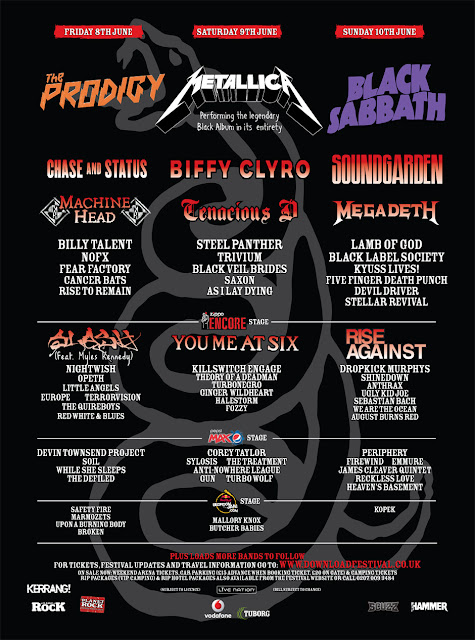 Hi folks, getting close to the wire now ...
While Rhonda and I are in the UK for this coming week and Rhonda's folks are watching our incredible kids here, unfortunately the attention in terms of updates here at Chambers of Rock, will be minimal quite possibly if at all?!
My old Mum's (RIP) house where we'll be staying has no internet access, so quite when I'd get the chance to do anything during our stay there is questionable. Sorry.

As soon as I can get up and running again, you know I will but it will be a tough week over there, lots of memories, reminders, etc ...
Cheers for now and thanks for your continued support of the site.
Al
Season 10 of 'That Metal Show' almost ready to air on US TV! 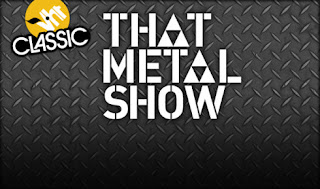 The very popular - In the US - VH1 Classic talk show 'That Metal Show,' fronted by rock radio host and 'know it all' rocker - In the best sense of the expression! - Eddie Trunk, is due to start it's next series, the tenth, at the end of March!
This program, is loved over here in the US, by regular rock fans, as well as metal fans.

Eddie Trunk is joined on the show, by two of his old friends each week, stand up comedians and rockers also, Don Jamieson and Jim Florentine, to add their 2c to the show that features typically each week, two star guests, sometimes more.
The last few seasons have also featured guest name guitar players, as the show goes to a commercial break each time.

This coming season will see a first, as they mix it up a little with guest drummers no less, with the very first episode of the new series due to feature former Dream Theater drummer, Mike Portnoy!

Anyway, enough from me, here are details of the new season's show guests:

New Episode Every Saturday
All Shows Air at 11pm ET/PT
Only on VH1 Classic!


The fans demanded it, and the fans finally got it. After 20 years apart, the long-awaited Triumph reunion (of vocalist/guitarist Rik Emmett, bassist/keyboardist Mike Levine, and vocalist/drummer Gil Moore) took place at Sweden Rock Festival, on June 7, 2008 and now, the band is putting the finishing touches on the DVD of that historic performance.


The tentatively titled 'Live at Sweden Rock Festival' set will consist of a DVD and CD, with a release date targeted for later this spring.

"It's great to finally be able show the world Triumph's reunion show at the Sweden Rock Festival," says Mike Levine.
"It certainly is one of the most memorable performances of our entire career! And they said it would never happen…"

CRAZY LIXX to release their new single “In the Night”


Swedish Hard Rockers CRAZY LIXX unleash today the new single “In the Night” which kicks off the release of the bands new album “Riot Avenue” due for release on Frontiers Records on April 20th in Europe and April 24th in North America. 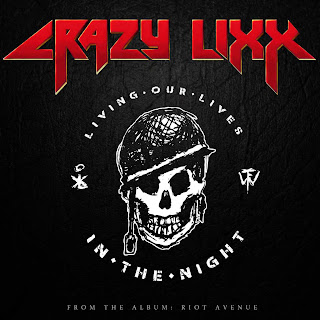 
Crazy Lixx debuted in late 2007 when they released their first album 'Loud Minority' which placed the band on the top of the Swedish Sleaze Rock scene.

In 2010 they partnered with Frontiers and released 'New Religion' - Review of that here: http://chambersofrock.blogspot.com/2010/06/crazy-lixx-new-religion-cd-review.html - and now almost exact a decade after vocalist Danny Rexon and ex-guitarist Vic Zino (now in Hardcore Superstar) formed the band, the band comes back with a brand new album!


The new single “In The Night” is also available as a physical copy, exclusively distributed in Sweden through Sweden Rock Magazine in the issue that will hit the streets this week. This special release will include two exclusive acoustic bonus tracks (unavailable elsewhere): 'Riot Avenue' and 'Fire It Up.'

“Into the Night” can also be streamed on the Frontiers Records webradio: www.frontiers.it/webradio

Journey with Loverboy hitting the road

Well, no major announcement on Journey's summer tour plans yet, but based on the four dates that are posted at their site, it looks like being at least some July / August summer US dates from the Californian rockers.
They do add also that Loverboy will be opening for those dates too, so clearly another 80's double header in the bag, as Canadian pop / rockers Loverboy haven't done a major US tour for sometime.

For more details go to:
http://www.journeymusic.com/pages/tour

The big tour is on by all accounts, so I hear and although neither website for Kiss or Motley Crue indicates 100% it's happening, there is at both sites a clock countdown ticking away.

This almost certainly indicates a major announcement and since Motley Crue's seems to expire before the one shown at the Kiss website, I'd guess that Motley Crue are the headline act?

The new album from Kiss has been touted as being titled 'Monster' with a 2012 release date identified, but at this time, no further news there.
Guessing that may be announced with the tour announcement.